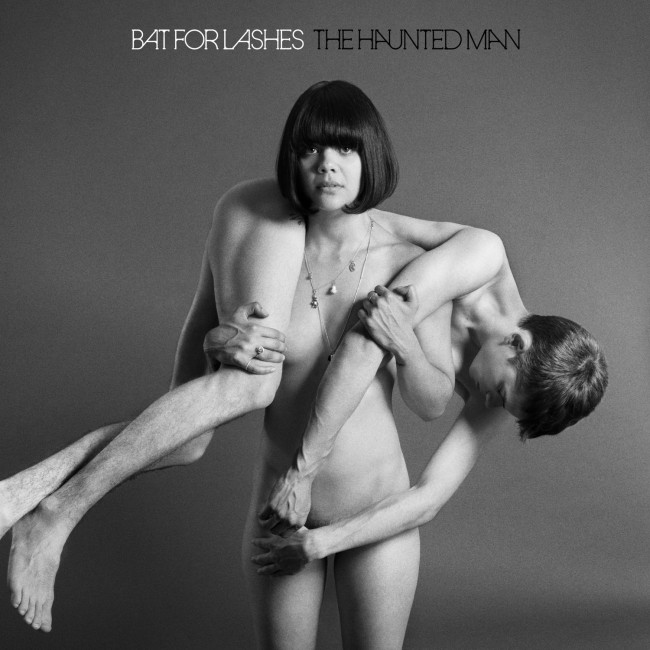 With Halloween once again upon us it seems only fitting that the aptly named Bat For Lashes (presumably Squirrels For Side Burns was already taken) releases this week her third album, the even more aptly named The Haunted Man. One look at the album cover and its plain to see that multi-instrumentalist Natasha Khan is already in the spirit of things, a completely starkers Ms Khan appears on it with an equally as naked man draped around her neck like a fine Russian mink, a fashion statement that even Lady Gaga might think twice about. But far from Gaga, it is Kate Bush that the artist seems to be most evoking within the contents of the album album, with its discordant melodies and sparse arrangements producing an unnerving at times, but ultimately pleasurable listening experience.

Opening number ‘Lilies’ starts off lush and ethereal but morphs into a stomping synth leviathan utilising the loud-quiet-loud formula that features prominently on the album. The single ‘All your Gold’ is nice enough, but you cannot shake the fact that its sounds oddly reminiscent of that Gotye song people got far too hyped over. The song ‘Oh Yeah’ has the single best opening of a song I have heard this year comprised of what sounds like the sea-gulls from Finding Nemo repeating the title over a drum line that can only be emitting from those Casio keyboards you used to find in the music room at secondary school, but before some-one starts stabbing at the ‘DJ! DJ!’ button it transforms into a Bjork-lite romp that ultimately disappoints but might grow on repeated listenings. But all the plaudits must be reserved for first single ‘Laura’, a masterpiece in understatement and minimalist song-writing, a simple meld of vocals and acoustic piano with flourishes of light orchestration that proves amazing song-writing beats gimmicks and over-production any time. Soul-wrenching.

Other notable moments on the album include the Gregorian chant breakdown on the album’s title-track as well as the weird pan-pipey intro to the song Winter Fields. Overall, far from being horrific in keeping with the holidays, the album is a solid release from an artist who answers the question ‘I’m a big fan of Kate Bush, can you recommend me any contemporary artists that are similar to her and if you say Florence and the Machine I’ll kick you in the head’.